...I have been meaning to photograph these bracelets for quite some time. Months infact. I find photographing these little suckers really, really challenging. I get all sorts of undesirable reflections, weird exposures, shallow depths of field (so lots of blurry bits), and they are generally just a big mess. I did these shots this afternoon. I used natural light (but in a shaded area). I used the flash on the first one as that was the only way I could eliminate most of the waaaaaaay over-exposed areas. I took about 10 shots of each and am still vexed about it all. I would NEVER get a job doing the Prouds catalogue ;-). 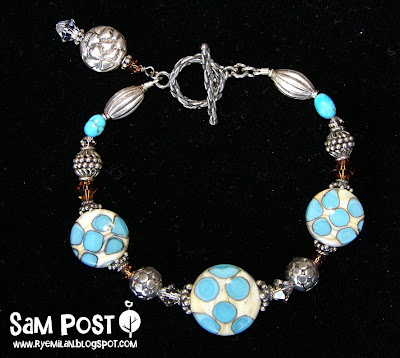 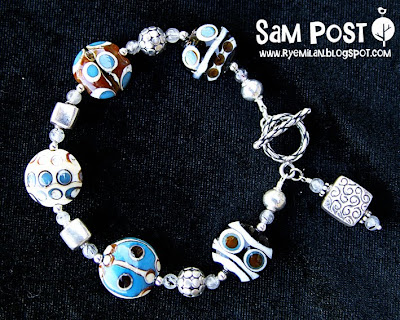 The beads in the first pic are by Amanda from rufusandroxy on Etsy. The beads in the second pic are by Terry at Silverfish Designs on Etsy. Both of these lampwork artists make such beautiful beads.
I love the earth tones and the turquoise colouring in them both. They look good with denim and make lovely autumn and winter jewellery.

Time to think about what I am going to throw on the BBQ. After saying that I wasn't interested in the BBQ-buying trip last week, I am now finding the prospect of cooking on it quite entertaining. On Monday I cooked some Portuguese style chicken on it (it came from Lenard's...I didn't season it myself), and it tasted rather fine if I do say so myself!

Well the bracelet looks awesome to me so you must have done something right taking the shots :-)

Our lenards shut down and I miss their portugese chicken!

Love my bbq! I never use the grill on our stove, unless the bbq is out of gas. We were in this house for about 6 months before I even knew if it worked or not haha

One thing I like to do is a Mexican chicken cheats dish - bbq some chicken breast, after you turn it over top it with some salsa and cheese for the last half of the cooking time... I'm sure there are more sophisticated ways to make that kind of dish but I love it!

Oh, PS! The original reason I was going to comment (got sidetracked thinking about portugese chicken haha) Love those bracelets!! You are so talented, I have tried beading a million times and I just don't have the touch, so I'm very jealous of people who can!!

Hey there Blogging Buddy!! Just LOVE your bracelets however the second 1 is my fave......just LOVE the colours in that one! I'm so envious of you and your beading! About the only thing I can thread is noodles on a piece of wool and I learned that in kindy! lol If you want I can make you a noodle masterpiece! roflol

I having been waiting patiently to see more bead bracelets! I actually stalk your blog to get a peek. I have even bought beads for some friends who bead. I don't make jewelry, but I love looking. I purchased some beads from souces that you mentioned on your blog and gave them to my daughter who does make jewelry. So far, no bracelets for me yet, but I'm hoping. LOL.

Thanks for all your lovely comments girls! You guys are very sweet.

jackie.stampster....I can't reply to you personally (there is no email attached to your comment), but I just wanted to say that your comment about stalking my blog for beading made me smile. I am glad that you were able to use some of my bead source links. All of those ladies make lovely beads and have been a pleasure to deal with. I'll keep my fingers crossed that you get a lovely creation from your daughter soon. 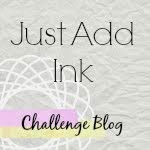